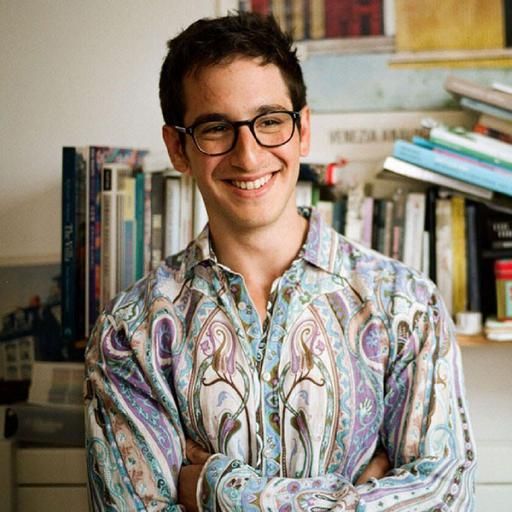 Adam Nathaniel Furman is a London based designer whose practice ranges from Architecture & interiors, to sculpture, installation, writing and product design. He pursues research through his studio 'Productive Exuberance' at Central St Martins, and the Research Group 'Saturated Space' which he runs at the Architectural Association, exploring colour in Architecture and Urbanism through events, lectures and publications. He was Designer in Residence at the Design Museum in London for 2013-14, received the Blueprint Award for Design Innovation in 2014, was awarded the UK Rome Prize for Architecture 2014-15, was one of the Architecture Foundation's "New Architects" in 2016, a L'Uomo Vogue Design Star 2016, and was described by Rowan Moore, architecture critic for the Observer, as one of the four 'rising stars' of 2017. He has worked at OMA Rotterdam, Ron Arad Architects, Farrells and Ash Sakula, and has written for Abitare, the RIBA Journal, Icon, the Architectural Review, and Apollo Magazine, amongst others. In all his work Adam explores the relationship between memory, imagination, history and communication at multiple scales, always with a critical eye towards the way in which sensual architectural form, in a dialogue with the past and the future, can communicate complex issues through eloquent and expressive shapes, colours, and environments. He has laid out an approach to the relationship between form and the conveyance of content, which simultaneously draws on new technologies and mediums, whilst anchoring itself firmly in the wealth of past traditions; a dialogue between progress and positivity, memory and loss, the ephemeral and fashionable and the eternal and immutable, which is vital to the production of designs that accurately reflect our contemporary condition.