Selencky///Parsons’s to design this year's Auditorium

We caught up with Selencky///Parsons to find out more about their design concept for this year's Auditorium which will host Talks with 100% Design.

'We wanted to create a visually striking and thought-provoking installation that was also fully demountable and reusable, challenging issues to do with wastefulness. The scheme has been designed so that it can be reused - either as a whole or dismantled and each component reused individually.

The auditorium acts as a large-scale infographic, creating a veiled perimeter, highlighting domestic plastic usage. The scheme is constructed from simple, inexpensive components that are readily available and that have an elegance and beauty in their own right - particularly when used in an unexpected context. The enclosure is to be formed from stacked, green, gabion cages. The mesh structure of the gabions gives a sense of enclosure whilst also having a level of permeability that will invite views through to the interior of the auditorium. Timber lined portals demarcate openings in the gabions allowing circulation in and out of the central space.

The gabions are partially filled with recycled white plastic balls which are composed in an organic, undulating formation to contrast with the highly structured geometry of the gabions. The plastic balls have been designed to represent the weight of plastic waste an average family of four will produce in a year. The balls will be recycled or repurposed within the local community after the show.

A ring of plants arranged around the top of gabions add natural texture and colour to the enclosure. The plants also serve a double function by representing the number of trees required to offset the carbon footprint of the plastic. Each plant represents one tree.' 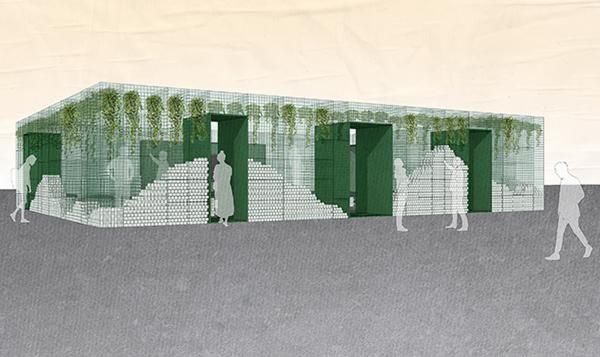 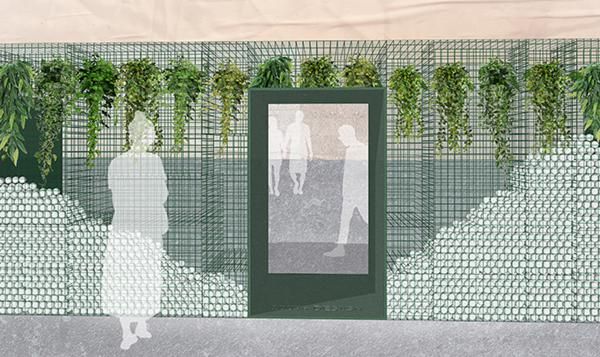